After pitching against a bunch of other agencies (there's some serious and talented competition out there by the way) we've won the three-year contract to help improve the competitiveness and productivity of Northwest businesses by building ENWORKS’ profile, regionally and further afield.

We've been lucky enough to work with ENWORKS before, as they've been going strong since 2001, and have helped more than 10,000 companies to date. ENWORKS is now a leading authority on environmental business issues, providing free support for businesses to become more profitable by reducing their use of CO2, water and materials.

Anyway we think they're fab and it's great to be working with them again. The YouTube clip above is an example of one of our previous campaigns for them, which did not involve harm or injury coming to the businessman involved. Honest.

There is an alternative

We've just released our film for Cooperative Fortnight called 'There is an alternative'. We had luminaries from a host of cooperatives come into the studio for the shoot, and I'm dead chuffed with the outcome.

Driving out into a digital age 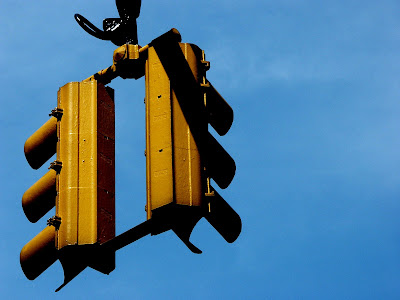 This is me: I'm a geeky, early adopting cyclist. Love tech, hate cars.

The former is the future, the latter is the smelly, polluting past. Which is why I've got myself in a frothy little lather about a posting on the eminent and fabulous Streetblog in the States. The piece, by Sarah Goodyear, follows up an earlier article in Ad Age about young Americans driving less as they become ever more seduced by the tippity-tap texting and Twittering of the digital age.

The proposition is that a recent decline in registered drivers amongst younger people is coming about as 'the younger generation increasingly sees a wired lifestyle as incompatible with a motorized one'. Quoting one pundit in Ad Age, Streetblog sets out the case:

"William Draves blames the Internet. Mr. Draves, president of Lern, a consulting firm which focuses mainly on higher education, and co-author of "Nine Shift," maintains that the digital age is reshaping the U.S. and world early in this century, much like the automobile reshaped American life early in the last century.

"His theory is that almost everything about digital media and technology makes cars less desirable or useful and public transportation a lot more relevant. Texting while driving is dangerous and increasingly illegal, as is watching mobile TV or working on your laptop. All, at least under favorable wireless circumstances, work fine on the train. The Internet and mobile devices also have made telecommuting increasingly common, displacing both cars and public transit."

Now, I know the reality of some 'tech' on public transport (such as upstairs on the number 86 from Chorlton) is a yoof playing hardcore rap through the tinny speaker on his Nokia rather than elegant young metropolitans Twittering about Derrida but hey, there's something here that's hugely uplifting, not least because so much of this frenzied 'thumb action' is about connections, communications and social media.

Tune in, switch off and buy a ticket. Fabulous.
Posted by Steve Connor at 09:21 3 comments: