The MAMILs have a job to do - ditch the Lycra!

Love this. Courtesy of my friends at Love Your Bike and via the excellent online news site road.cc, I've encountered the marvellous concept of MAMILs (or middle-aged men in Lycra).

Basically the idea is that there's major growth in cycling amongst men of a certain age who, instead of turning to a Porsche or a Harley Davidson as they lurch headlong into their midlife crisis, are buying a high-end bike, peeling on some crotch-hugging Lycra leggings, and then getting out on the road. 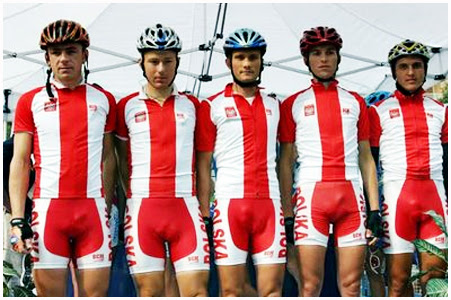 The findings are part of a report released in June from Mintel. Amongst the 'highlights' in the report are the fact that the keenest cyclists are most likely to have at least two cars in their household, they're also broadsheet readers and are likely to have an average household income of over £50,000.

And they're mostly blokes. Middle-aged blokes.

So far, so almost fascinating. My own hugely comprehensive survey on the streets of Manchester is that there are a growing number of cycling 'typologies' of which we should be aware:

FFOPs - Floaty Frock on Pashley. This new subset of cyclist is a bloody breath of fresh air. Normal clothes, elegant bike and generally higher regard for the little things like red lights, not mowing down pedestrians and being generally courteous.

NOAF - Nutter on a Fixie. You know who I mean. They're not in Lycra. They're in black skinny jeans. Anarchists on two wheels for whom no piece of roadspace is too tight a squeeze. Love their bikes though. Yum.

BBOYS - BMX with Bumcrack. Why these students are 'commuting' along Oxford Road on those tiny little stunt bikes is beyond me. Apart from the constant flashes of bottom, equally amusing is their insistence in overtaking you whilst frantically peddling their teeny little wheels only to slow down horribly once you hit a straight patch of road. Bless.

Anyway, back to those MAMILs. I've got a problem here. First of all, like my wife I think that Lycra is a privilege and not a right; lots of these boys are NOT equipped to be wearing Lycra and should steer well clear. Furthermore there is a central issue about making all cyclists look like refugees from the Tour de France.

We have to normalise cycling. It's critical! I think those of us for whom cycling is our daily preferred mode of travel have a moral duty, which I would set out as follows:

1. Look normal. Do not wear Lycra and where possible avoid performance clothing. It looks ugly, and sends out a subliminal message to the rest of the world that cycling is an extreme sport. It is not, it is the best way to get from A2B and the weirder we make it look, the less likely people are to join us in the saddle. Grow up, and stop dressing up.

2. Be super-courteous. We should be the very opposite of Lycra banditos and instead be the lovely, lovely knights and knightesses of the road. Let the bus out! Make way for that driver! Stop and give someone directions! And of course, stop at red lights.

3. Embrace elegance. Here of course I'm following a well trodden path set forth by the excellent people at The Tweed Cycling Club and outlets like Rapha. We should make cycling aspirational, desirable and the mode du jour! Now if I could just afford that Timothy Everest jacket, I'd be away. Must also figure out the etiquette of pipe-smoking whilst cycling.

Mintel are right to highlight the MAMIL but rather than jibing at him, he should be challenged, to become an ambassador for cycling, on a mission to get more people peddling. And he could start by choosing to cycle to work, and do so in a way that makes the whole thing seem fashionable, safe and not requiring the donning of an outfit that makes you look like you're either about to jump down a luge run or storm the Death Star.

I'm thinking plus fours and a natty cap might do the trick.

Just stumbled, thanks to the Twitter feed of @antonvowl, upon a genuine glimpse of what hell might look like. The Daily Mail and Internet Explorer, fused together like two dark, sinister and dastardly siamese twins. IE8 customised for the Mail Online. Genuinely hurts my head, this one.

In fact, it's got me wondering if Satan is actually walking amongst us, running an FMCG brand and marketing company (not that hard to imagine) working up evil brand synergies to unleash upon us all.

Next up? How about Jeremy Clarkson's own brand line of foie gras pâtés? And isn't it about time they brought out a Blackberry with an in-built taser? More suggestions please, and I'll pass them onto the fallen one.
Posted by Steve Connor at 08:36 1 comment:

Have got myself worked up over the last few days about the notion of a radical eco-efficiency programme for Greater Manchester's local authorities, all carried out in the interest of protecting public services... Basically a Factor Four programme for the city region. Given the possible scale of such an effort, it could save millions, but would have to be ruthless in the pace it set and uncompromising in terms of challenging bureaucracy.

This is so brilliant I've had to watch it twice. They even rapped 'carbon footprint'! Amazing.
Posted by Steve Connor at 13:27 1 comment: