Goodness me it's been hard keeping this one quiet. We've been very, very lucky at Creative Concern HQ to be working with the Manchester International Festival on a proposed vertical farm, right here in Manchester, housed within a transformed office block.

We've worked on the feasibility with sustainable food expert Debbie Ellen, Capital Relations and, naturally, our brilliant friends at Urbed.

More details eventually... but for now, here's Urbed's visual schematic as a 'taster' and I suggest you all book your tickets for the awesome Dickson Despommier! 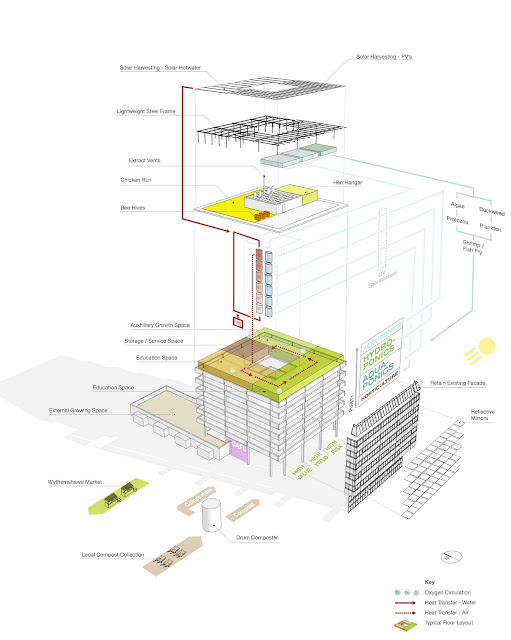 NOTE: email digitalmap@marketingmanchester.com if you think you should be on our next map of Online Manchester!
__

There’s an urban myth about Manchester and computers that I am utterly beguiled by.

Alan Turing, University of Manchester academic, father of modern computing and closet homosexual took his own life in 1954.

The myth has it that the cyanide he used was in an apple, which was then left, with a bite taken out of it, on the stand next to his death bed.

Fast forward to the late 70s and Steves Jobs and Wozniac are busy in a garage, building what will become the Apple computer. They need a logo for the company. After an early flirtation with an Isaac Newton cartoon they go for an apple, with a bite taken out of it.

And there you have it. Apple’s homage to Turing as they half-knowingly created a leading global brand of the future, complete with a hardline back to the original modern city of Manchester.

None of which is true of course, but as memetic messages go, it’s one that spreads the second you tell it. It’s irresistible, I hereby dare you not to mention it to someone.

I like to think it is true, in fact I insist it is, as I love to see my favoured brands united in some way. Manchester plus Apple is a kind of dream combo for me; if I could see brand collisions of Monocle Magazine and Paul’s Tofu, or maybe Bourgeois Boheme and Rapha, I’d be a very, very happy man.

But back to memetics.

How ‘stuff spreads’ is on my mind as I ponder the next phase of our work on Manchester’s digital map. Last year we researched, and then depicted on an interactive map, a cross-section of the websites and blogs that collectively make up our city’s online presence – our pixelated tendrils if you will.

We did the research, created the map, and now we’re asking an elite cadre of bloggers and tweet-happy social media types to comment on the notion of ‘online presence’ and more specifically, tell us and Marketing Manchester, our client, where the project should go next.

It seemed the right way to go about it really. It means we want you, dear reader, to tell us what YOU think.

In the process we’d like to uncover some more things we didn’t know about Manchester online, generate some insights into how cities should approach their digital ‘brand’ experience, and maybe we’ll even see some more urban myths, spreading out through the ether, next up from me, the one about how Manchester invented dance music.

*As well as the title of this blog entry, this is also the slogan emblazoned on the best selling T-Shirt at Manchester Airport. You can buy one here.

Postscript: Makes you proud to be a BritGeek. In September of last year, following a frenzied campaign on the Internet, the then Prime Minister Gordon Brown  issued a public apology on behalf of the British government for the way in which Turing was treated after the war.