Communicating sustainable development. The phrase itself makes it sound like you’re speaking Klingon. You can place it alongside ‘capacity building for community empowerment’ or ‘centres of excellence for best practice’ in the hideous jargon jamjar of obfuscation.

In short, the words don’t help.

The other challenge for those of us dealing with communications and sustainability is the fact that so many people can feel paralysed by the sheer scale of the issues and problems we’re seeking to tackle. Global warming? Quick, hide beneath the duvet! Species extinction? Heads in the sand, comrades! Deprivation and global poverty? Pass me the remote, it’s time for Dancing on Ice. This is territory that our colleagues at Futerra have explored really well in their ‘Rules of the Game’ for communicating climate change. Creating fear without agency is not a smart move.

If you’re planning a major campaign on something like climate change then one winning strategy for success is to root your creative work in something that the audience can strongly relate to: their own lives and the place where they live. You need to think global but talk local. 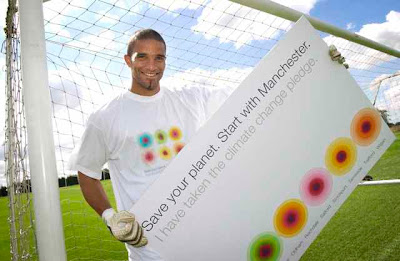 We did this when we created the Manchester is my Planet campaign towards the end of 2005 for our clients at Manchester: Knowledge Capital. The phrase itself was conceived to fuse civic pride and a very Mancunian cockiness with the global challenge of climate change. As well as the campaign title, there was a slogan of ‘Save your planet, start with Manchester’ that worked really well. We even drilled further down with the campaign and created more local variants; ‘Trafford is my Planet’ is a campaign by one of the Greater Manchester authorities that is running to this day. We used local celebrities and more than 100 large organisations across the city (transmitters, in the comms jargon) to help reach out to our target population of three million, using local, trusted networks to give our global message added relevance and connectedness. It worked as a strategy, and so far 17,000 people have taken a pledge on climate change across the Manchester city region. I’m particularly chuffed that elements of the campaign strategy have been employed elsewhere in the UK, including for cities like Sheffield and Nottingham.

Another example of ‘think global, talk local’ in the Northwest of England is a campaign called ‘SMYLE’ run by Vale Royal Borough Council. I really like this campaign - which I hasten to add we had no part in professionally. SMYLE stands for ‘Supporting MY Local Environment’ and is strongly grounded in the idea that each and every one of us has the power to make a difference to our local environment, as part of our collective contribution to a better environmental future. Campaign highlights for me have to include the ‘Rubbish Heads’ street theatre (strangely terrifying, could be off Doctor Who) and a campaign video narrated by Derek Griffiths (TV presented and voice of SuperTed... holds a special place in many a thirtysomething’s heart).

SMYLE, alongside Manchester is my Planet, is a great example of a campaign that doesn’t use disconnected, global disaster imagery and unrooted, difficult to contextualise global statistics to try and appeal to someone who happens to be out shopping for spuds or who has just opened an email from a friend. Good campaigns connect to their audiences and take them on a journey; bad campaigns preach to the converted and leave the rest of us stone cold.