Charting our course for a certain future 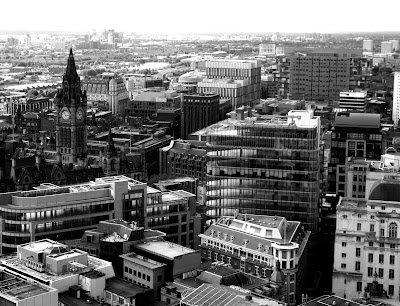 New year, new plans to save the world... but first a look back, finally, at the big bash that took up a good deal of my time at the tail end of 2010 - the first stakeholder conference for ‘Manchester: A Certain Future’, which took place at the revitalised Museum of Science and Industry (MOSI) on 30 November 2010.

(M:ACF in case you're wondering, is Manchester's Climate Change Action Plan, which I had a hand in helping to write in 2009.)

Back to MOSI, though. Delegates from a host of different organisations and sectors took part in a hands on, highly interactive day of workshops, debates and networking sessions designed to help all of those attending to share their plans for the future, identify what was working (or not) in the fight against climate change and to make fresh connections with possible future partners.

The shape of the day was deliberately experimental, from an art session where participants were given the opportunity to literally draw what a low carbon culture looked like, to ‘carbon dating’ where the focus on was on a series of quick fire meetings with new people to share ideas and thoughts for the future. There was also a masterclass on low carbon regeneration and a series of sessions where delegates shared the barriers they had overcome, or their plans for the future.

As well as chairing the day, I had the chance to run two 60-person sessions with Joe Ravetz of the University of Manchester to focus peoples’ minds on that certain future, using the scenarios (good and bad) that have been created by the University’s Eco Cities research team. The two scenarios – an Upward Spiral and a Long Descent - were brought to life by fictional radio broadcasts from the future crafted by Phil Korbel of Radio Regen and then participants voted on how they thought Manchester stood in the face of such changes.

The good news? Few participants thought that our city is on a collision course with certain disaster, by stating that they thought the future set out in a Long Descent was a sure thing. In fact in both sessions, half or more of those taking part stated that they thought Manchester was a headed in the right direction, to some degree.

When we asked in what areas we were strong or weak in the face of climate change, those taking part felt that we had a good track record on technology and innovation an that we had strong political leadership driving us forward. Where were judged to be weaker, by those voting, was on a shared set of public values around climate change, and on working towards a more equal society.

Shared values and developing a low carbon culture were the clear priorities that emerged from the day, including a final concluding vote from delegates that gave our stakeholder steering group a clear mandate to push for this as a focus for 2011.

Attendees also told us how they thought we could improve the conference for 2011, including building in more advanced notice of the event, improving the diversity of the event (though a number of attendees remarked on how it wasn’t the ‘usual suspects) and to create a greater presence for the event in the conventional media, as well as the Twitter reports that were a feature of the day, thanks to Inside the M60.