It’s fifty years since a plucky and rather diminutive Yuri Gagarin shot into space, cooped up in a contraption with the computing power of your average remote control, and what I really love is the fact that during his victory tour, he made a major splash in Manchester, only his second stop outside the Soviet Bloc, following the flight into space.

The stop-off had a lot to do with the fact that Yuri was a former foundry worker, and so the Amalgamated Union of Foundry Workers in Manchester decided to invite the now world-famous cosmonaut to come and visit Manchester in July 1951.

As he emerged from his RAF plane at Ringway Airport, it was raining (I know, I know) and he apparently asked for the car’s top to be rolled down, saying: “If all those people are getting wet to welcome me, surely the least I can do is get wet too!” 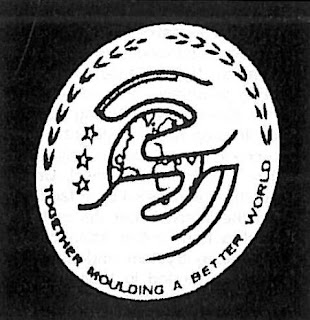 He was pretty much mobbed on his arrival by a crowd that included the then ‘Mayor of Stretford’. He then drove through Moss Side to the Union’s HQ, where his car was reported showered with ‘red roses, poppies and carnations’ and, this is my favourite bit, was presented with a specially designed medal that to my eye could have been the early work of Comrade Saville, if he’d been around at the time. It included the slogan ‘Together Moulding a Better World'.

He also stopped at Metros works in Trafford Park and was lunched by the great and the good at Manchester Town Hall, where he met Sir Bernard Lovell, who said: “He will become one of the historic figures in civilisation because he is the first man to live in a new environment. There are lots of things I would like to ask him, but probably he would not answer them.”

There are two pieces of press copy surrounding the visit that I like. First of all the Manchester Evening News which wrote how ‘Major Gagarin is above the tedious enmities of politics. His was a human achievement; a victory for man's spirit and courage’, but there was an even lovelier line in Pravda, which makes me a little weepy: 'Manchester's toiling masses accorded Major Gagarin a reception unsurpassed in its cordiality. Never over the past many tens of years has Manchester met anybody with such an embrace’. 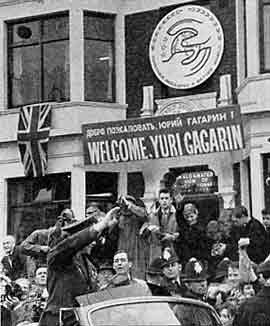 Email ThisBlogThis!Share to TwitterShare to FacebookShare to Pinterest
Labels: Manchester